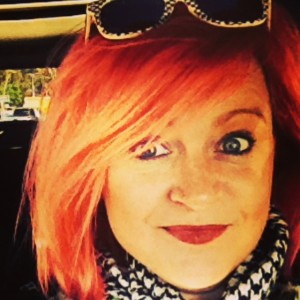 Angela will be featured in the Kia commercial series for The Voice that will air during the show December 3rd and 10th, 2013 on NBC.

She has a distinctive sound and personality that resonates in her songwriting that can be heard in her latest debut “Eggshells”. “I just wanted to let you know how much I enjoyed listening to Angela Lee Sloan’s EP! She’s got a really appealing voice and excellent songwriting skills! Love her wonderfully twisty melody on “Deja Vu. All three songs are catchy and fresh. Nice work!” – Robin Frederick, Director A&R Team at TAXI.

Born in Liverpool England to Dad, Michael Sloan, who opened up for The Beatles at The Cavern as drummer for The Georgians, and Mum Pattie Lee who sang for England’s Mecca Orchestra, she was surrounded by great music from the get go. The family split up, and Mum took Angela and her brothers to Los Angeles at age four where she was soon discovered by an Agent, and cast in John Houston’s Annie. A favorite of Charles Schultz, she became the voice of Lucy in The Charlie Brown and Snoopy Show and Peanuts specials. Angela was invited to sing for the President at the White House at age 12 and wrote her first song at age 13. Angela appeared in numerous commercials and TV shows including a recurring role on Who’s the Boss, and as a regular on Hogan Family.

Angela studied piano from 5-14, and was the youngest winner of a Full Vocal Scholarship with Elizabeth Howard’s Vocal Power .

In 1998 Angela began a successful career in radio as an Executive for 3 years at KROQ and 9 years at STAR 98.7FM learning the business of Radio all the while marinating in all her favorite acts .

In 2001, she formed the band Sloane with her late brother Robbie “Bob” Sloan, and performed at many LA venues and opened for Sixpence None the Richer at the Santa Monica Pier. When her brother passed away, the band came to a halt.

In 2009, Angela was blessed with her beautiful baby girl Emma and decided to leave radio to enjoy her two passions; her beautiful little girl and taking her singing, songwriting and guitar playing to the next level.

In 2011, Angela joined both ASCAP and TAXI to learn all she could about the business of Singer/Songwriting. It was there she met her mentor Judy Stakee(Warner Chappell Music, SVP of Creative Artist Development and Current CEO of The Judy Stakee Company). Wanting to develop her song book, Angela gained such insight from Judy Stakee’s Writers Group Basic Workshop, and went back for more graduating from her Writers Group Workshop 2. Excited with Angela’s music, Judy set her up with Artist Steve Sulikowski ( 16 Frames, Dropline, and Producer of Salena Gomez’s, “When the Sun goes down”), who produced Angela’s first EP “Eggshells”, now on ITunes.

“Eggshells” was produced by Angela Lee Sloan and Steve Sulikowski, and mixed by Rob Chiarelli, Producer/Mix Engineer with credits on more than 70 Gold and Platinum albums including Pink, Christina Aguilera and LeAnn Rimes.

“Déjà Vu” has a “wonderfully twisty melody”, captivating lyrics with music and rhythms so infectious that you will be asking yourself, “Have I heard this before?”

“Eggshells”, the title track, “is an anthemic song about going through a bad relationship feeling like you’re walking on Eggshells, and then finally seeing the light” which will leave you clapping and cheering.

Considering herself more a “Rocker Mom” than a “Soccer Mom”, Angela wrote the track “Safe with Me” for her beautiful two year old daughter(now 4) as “a Rockin’ lullaby”. Her soulful voice will melt your heart and take any new Mom, or Mom of any age, back to a time so sacred.

Thanks to Taxi, “Safe with me” was just signed by Crucial Music to represent for film and television. Latest breaking news, as of just 8/1/13, Tanvi Patel, head of Crucial Music just let Angela Know that the song had just licensed the song after only 1 month of them representing it! .

Today Angela continues her musical journey as a Mom/Woman/Guitarist/Singer/Songwriter and is currently working on her follow-up CD to “Eggshells” with her newly formed band “Angela Lee Sloan and The Last Call”, who can be seen playing around Los Angeles.

August 18, 2013 you can see “Angela Lee Sloan and The Last Call” ROCKIN The Center Of the World Festival in Pine Mountain Club, CA!

In October 2013, Angela’s song “Safe with Me” was licensed by Cincinnati Insurance for their marketing campaigns.

In December 2013 you will see Angela in the featured Kia commercial series for The Voice! that will air during the show December 3rd and 10th on NBC.